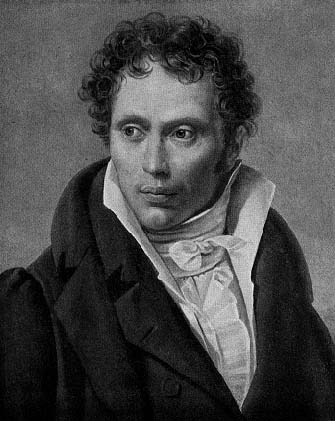 "This world is the battle-ground of tormented and agonized beings who continue to exist only by each devouring the other. Therefore, every beast of prey in it is the living grave of thousands of others, and its self-maintenance is a chain of torturing deaths. Then in this world the capacity to feel pain increases with knowledge, and therefore reaches its highest degree in man, a degree that is the higher, the more intelligent the man"
Arthur Schopenhauer
("On the Vanity and Suffering of Life").
German transcendental idealist Arthur Schopenhauer, author of The World as Will and Representation (1819) was (arguably) a negative utilitarian avant la lettre. Schopenhauer was certainly a lifelong pessimist: “[Our] existence is certainly to be regarded as an error or mistake, to return from which is salvation” (Schopenhauer [1819], volume II, p. 605]. Schopenhauer believed that it would have been better if the earth were "as lifeless as the moon". He was "a lonely, violent and unbefriended man, who shared his bachelor's existence with a poodle. ... [He was of the view that the world was simply an idea in his head] a mere phantasmagoria of my brain, that therefore in itself is nothing." (Chambers)

There are affinities between Schopenhauer's thought and Buddhism. And like Buddhists, Schopenhauer recognised that morality transcended narrow species self-interest: “The assumption that animals are without rights and the illusion that our treatment of them has no moral significance is a positively outrageous example of Western crudity and barbarity. Universal compassion is the only guarantee of morality." However, whereas Schopenhauer believed that hope lay in aesthetic contemplation and the practice of asceticism, modern negative utilitarians are likely to place greater faith in biotechnology.